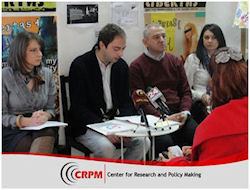 On November 1, 2011 in the cultural center “Cre8ive8” held a roundtable in the framework of the “Brain Gain Advocating for policies for successful reintegration of highly educated returnees in the Western Balkans”. In this event were presented the researched results on Macedonia as a draft study on the brain drain and mechanisms for integration and networking of returnees from Macedonia. The results of the survey were presented by Riste Zmejkoski from Center for Research and Policy Making. Representatives from “Cre8ive8” Dragan Atanasov, Sandra Anastasovska from “Youth Educational Forum” and Christina Cipusheva from Faculty of Business and Economics at the University of Southeast Europe, also presented their presentation for the project.

Marija Risteska and Ana Mickovska- Raleva from the CRPM presented the key findings from the governance assessment in the sector of education. The methodology was piloted in 8 municipalities. The research results from the education report are available and published at:

PROJECT ON COMMON VALUES IN SCHOOL 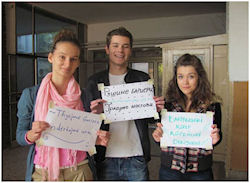 Center for Research and Policy Making in cooperation with Cre8ive8 and with the support of City of Skopje on the month of October, 2011 realized the project “Promotion of common values in schools” aimed to promote and foster multi-ethnic values in mixed secondary schools in Skopje through joint work on short films with themes of non-violent resolution of conflicts. To this end, 25 students from Skopje ethnically mixed schools, attended training which consisted of two modules: one-day module for non-violent conflict resolution and one-day module for working with basic video equipment and basic programs for the installation of video material. This project covered five ethnically mixed secondary schools in Skopje: Zdravko Cvetkovski, Lazar Tanev, Cvetan Dimov, Arsenio Jovkov and Zef Lush Marku. Students had training opportunity to acquire new knowledge for working with video as a medium which promoted coexistence in their schools.

VISA LIBERALIZATION- WHERE AND HOW MUCH HAVE THE MACEDONIAN CITIZENS TRAVEL AFTER THE FALL OF THE VISA REGIME?

The Center for Research and Policy in the period February 2010 – March 2011 conducted two surveys on “The movement of citizens of the Republic after visa liberalization” whose goal was to investigate the effects of visa liberalization on the mobility of citizens of the Republic. The research gave answers to several fundamental questions related to the movement of the citizens of Republic of Macedonia, for example a profile of the people that travel the most, reasons for travel in the Schengen countries, which are the favorite destinations for travel outside the Schengen area and how much was the duration of stay. The full report can be found on the following link: http://policy.mk/policywp/

THE SCHOOL OF PUBLIC POLICY “MOTHER THERESA”: COMBATING TERRORISM AND ORGANIZED CRIME IN THE WESTERN BALKANS 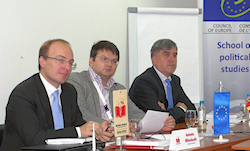 1. Defining Modern Terrorism and the Legal Response to Terrorism;

3. Connections and differences between organized crime and terrorism – from theoretical concepts to practical consequences;

4. Combating trafficking of Women in Macedonia and Western Balkan;

6. The threats after Bin Laden;

7. Role of International Organization in Fighting Terrorism and Organized Crime/ “Interagency cooperation in the Republic of Macedonia and fight against terrorism and organized crime;

8. Cyber Terrorism” and “The role of Information and Technology in the Fight against Terrorism;

9. Strategy of the EU internal security” and “EU security policy towards the Western Balkans;

10. The role of the international organizations in the world order; 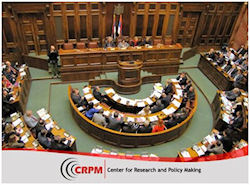 Representative from the Center for Research and Policy Making, Frosina Ilievska along with representatives from the Parliament, media, business and NGO sector where participants on the conference: Energy-development-democracy: Shaping a new energy future for South East Europe (SEE), which was held on 17-19 October 2011 in Belgrade, Serbia. The conference was organized as an activity of public dialogue project for energy sustainability in SEE. The project is funded by GIZ, and implemented through the network of schools of political studies in which the Center for Research and Policy Making is a member, through its School of Public Policy “Mother Theresa”.

CONFERENCE: MAPPING THE LEADERS IN MACEDONIA AND ALBANIA

On the 6th of October 2011, the Center for Research and Policy Making (CRPM) promoted the study “Mapping the leaders in Macedonia and Albania: can elites promote positive social change?” The aim of the project was to provide an insight into the processes of elite circulation in Macedonia, Albania, Kosovo and Montenegro. In addition to this, at the event was also presented the publication with the main findings from the research in Kosovo and Montenegro. This project was funded by the Regional Research Promotion Programme in the Western Balkans, and implemented by CRPM (Skopje) and Institute for Democracy and Mediation (Tirana)

MONITORING OF POLICY IMPLEMENTATION AND APPLICATION OF GENDER RESPONSIVE BUDGETING’ IN SARAJEVO, BIH 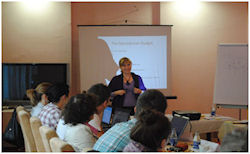 CRPM’s Marija Risteska, participated on a three day workshop on ‘Monitoring of policy implementation and application of gender responsive budgeting’ in Sarajevo, BIH’ on the 3rd -5th October 2011. Over the past two years, UN Women has provided support to national and local stakeholders in strengthening democratic governance and advancing women’s rights through initiatives aimed at mainstreaming gender in policy planning and budgeting. Gender Responsive Budgeting (GRB) has been identified and progressively used in South East Europe as important tool for advancing gender equality in key national, regional and local strategies and action 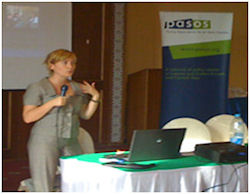 On September 26th -28th , 2011- Marija Ristevska and Ana Mickovska Raleva from Center for Research and Policy Making-Skopje commenced their work in Cairo with CRPM’s partners “NAZRA for Feminist Studies”. The aim of the partnership was to build capacities to strengthen political participation of women in Egypt on the forthcoming elections in November! The seminar was part of the PASOS project “Linking change-makers in the Middle East & North Africa with democratic reformers of post-communist (Central and Eastern) Europe” and was held in cooperation with NAZRA for Feminist Studies, an Eygptian civil society group. Both, Marija Risteska, Executive Director of CRPM, and fellow CRPM policy analyst Ana Mickovska-Raleva presented their presentation on the seminar where they spoke on policy analysis, research, and advocacy. 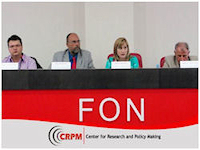 The Center for Research and Policy Making (CRPM) from Skopje and the School of Public Policy “Mother Theresa”, in partnership with FON University, Friedrich-Ebert-Stiftung, office Skopje (FES) and Open Society Institute Think Tank Fund (TTF) organized an international academic conference dedicated to the 20th anniversary of the independence of the Republic of Macedonia titled ‘Twenty Years of Macedonian Independence: economic, political and policy developments’? The conference was held at the premises of the FON University on 15-16th September, 2011

PROSPECTS FOR VISA LIBERALIZATION BETWEEN EU AND GEORGIA AND ADVOCACY PLANS FOR SUPPORTING THE PROCESS. 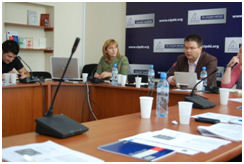 CONFERENCE: “ONE DECADE AFTER OHRID FRAMEWORK AGREEMENT: LESSONS TO BE LEARNED FROM THE MACEDONIAN EXPERIENCE” 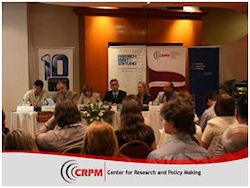 One Decade after Ohrid Framework Agreement: Lessons to be Learned from the Macedonian Experience” was held in Skopje, in the hotel Continental, in the days of June 24-26, 2011. Speakers at the opening of the conference were the resident representatives of Friedrich Ebert Stiftung and Kondrad Adenauer Stiftung, Mr. Heinz Bongartz and Ms. Anja Czymmeck and the director of the Open Society Institute Think-Tank fund, Mr. Goran Buldioski. Mr. AbdulaqimAdemi , Vice-Prime Minister of the Government of Republic of Macedonia, responsible for the implementation of the Ohrid Framework Agreement and Professor Florian Bieber from the University of Graz were the special guest speakers at the opening session. The conference was opened my Dr. Marija Risteska, Executive director of the Center for Research and Policy Making, with short introduction and reading of the welcoming letter sent by the president of the Republic of Macedonia, Dr. Gjorge Ivanov. The conferece had 6 panels which where titled:

Panel 1: The conflict, the agreement and the reconciliation: 2001 then and now

Panel 3: The Ohrid Framework Agreement in the Southeast European context

Panel 5: Equitable representation for “non-majority communities” in Macedonia – Until when?

Panel 6: The future of Macedonia and the region

Special panel on the initiative for RECOM 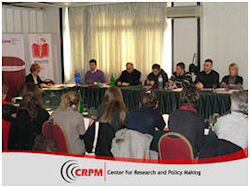 The School of Public Policy “Mother Theresa” was officially launched on 28 of January 2011. Main subject of the first session was “Freedom of expression – Contemporary issues and debates with relevance for Macedonia”. The School was opened with welcome speech by Dr. Zhidas Daskalovski – Director of the School of Public Policy “Mother Theresa” and Abdulakim Ademi – Vice Prime Minister/member of the Program Advisory Board of the School..