Home The Name Issue – Past or Future

The Name Issue – Past or Future 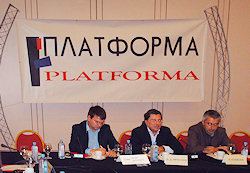 At public event organized by the Center for Research and Policy Making and the initiative Platforma, several experts met in Hotel Aleksandar Palace on 24. 10. 2008 to discuss the latest developments concerning the “name issue.”

The keynote speaker, former Minister of Interior and Foreign Affairs, Professor Ljubomir Frckoski, analyzed the mediator Niemetz’s last proposal and made suggestions as to what Macedonia should do next. According to Frchkoski the new name for international use, the Republic of Northern Macedonia, is a good option for Macedonia if other issues are to be solved- the name of the nation and the language. That is the ‘red line’ which Macedonia should not cross. “The issue about the new passports is already settled,“ he said, as it is suggested that the names Republic of Northern Macedonia are written in English and French, while Republic of Macedonia is written in Macedonia. The Greeks see themselves as a homogenous nation, and if the term “Macedonian” is free of exclusive use by any of the parties, as it is suggested, then it will be automatically ascribed to Macedonia by the international community. 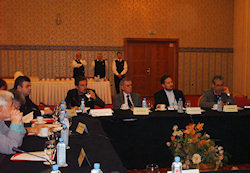 The name Republic of Northern Macedonia is “the best solution so far,” continued former Prime-Minister Ljubcho Georgievski. Like Frckoski, he insisted that we must keep the right to be called a Macedonian nation speaking a Macedonian language. He admitted that, for 15 years, the governments of Macedonia, including the one he led, only pretended taking part in negotiations with Greece. “The authorities must stop being observers and start acting like real negotiators,” he stated. Even if we are not successful in this negotiation cycle, we must show a strong determination that we are willing to negotiate, and we may not hold grudges against the main actors, as long as they showed this determination and did not go beyond the ‘red line.’ 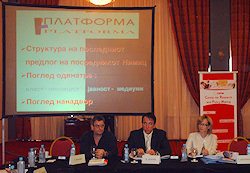 Radmila Shekerinska from the opposition party, SDSM, criticized the fact that this debate has not yet been substantially held in the Parliament. She said that she sees the management of this process as very unsuccessful, that the main facts about the negotiations are still hidden, and that wrong and contradictory information is often placed in the public. “Macedonia negotiated at home more than abroad,” she inserted as she tried to explain the populist abuse of this problem in the internal politics. The question about the language as part of the package has been placed with the purpose of reaching a compromise, in which Macedonia would end up as the winner. However, “anyone saying that a success in the negotiations is a national treason, without presenting a plan, a vision, about what would happen to the country in the next 10-20 years is absolutely unacceptable,” she concluded.

In a very emotional speech, Jagnula Kunoska from VMRO-DPMNE raised the passion among the auditorium. She said that the name issue is not only a bilateral problem with Greece, but much broader. The starting point we need to ask ourselves is “why Greece wants to change our name?” If the name is changed, it will be too late to discuss about the nation and language afterwards. “We must make Greece first recognize our identity and language, and than we can accept to negotiate about the name,” she added. About the name Northern Macedonia, she said it is completely unacceptable, since she is a “southern Macedonian,” referring to her heritage from the Aegean Macedonia [the Greek region of Macedonia]. “We are not even worthy to discuss about the name at these panels,” she said, and added “I can’t accept to desecrate our name, now that we have a sovereign and independent country.”

Zhidas Daskalovski, from CRPM, started by saying that in these modern times, we must have the knowledge, the will to succeed, and to work hard in order to achieve our goals. It means that we need to react and use all available arguments and resources in every situation and circumstances to defend our right to be named Macedonia. We need to use the fact that Macedonia is recognized by more than 120 countries under the constitutional name to ask the General Assembly of the UN to pass a resolution asking the International Court of Justice to check the legality of the admission of Macedonia to the UN under the temporary reference and obliging Skopje to seek a solution to the name issue with Athens. Even though we are blocked at this moment, we need to make a strategy of fulfilling all criteria for EU membership by 2014. Den Donchev, Trifun Kostovski, and Antonio Peshev spoke also at the debate.