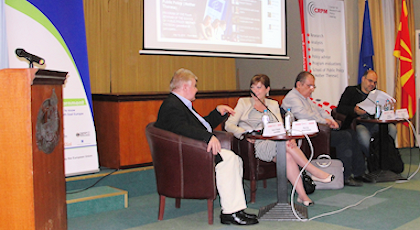 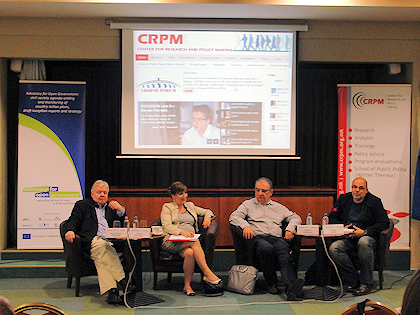 The public debate on “Reforms regarding the Open Government Partnership and Their Relevance to EU Integration of Macedonia” was held on 6th June2014 in Skopje. It was attended by 106 participants and provoked interesting discussions on how Macedonia has implemented the commitments in the first action plan on OGP. The three esteemed speakers have certainly contributed to enhancing the attendance at the event. The speakers were Dr. Hans-Jurgen Zahorka, Chief Editor at the European Union Foreign Affairs Journal (EUFAJ) and former MEP; Dr. Vladimir Gligorov, Professor at Vienna Institute for International Economic Studies; and Dr. Spyros Sofos, Professor at University of Lund in the Department for Politics and International Relations in the Middle East; while the discussion was moderated by Dr. Marija Risteska, Executive Director at CRPM. Each of the speakers focused on various aspects of what an open government represents.

They provoked a debate and raised questions about the quality and format of the information published transparently besides discussing the failure to publish many relevant public information held by governments. Each of the speakers reflected differently on how the OGP action plan should be implemented. 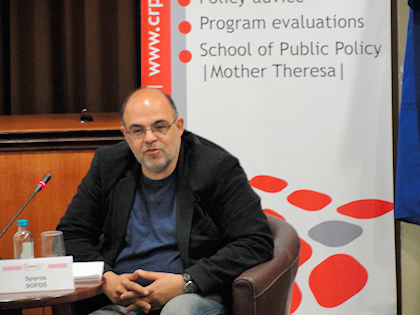 Professor Sofos gave a political and sociological point of view, pointing out that “We should all learn from each other’s experience and Macedonia could be a laboratory of ideas valuable for Europe as well.” He pointed out that even in the EU there are challenges when it comes to open governance and, therefore, constant efforts to improve communication and cooperation with citizen are evident. To relate the importance of OGP to EU integration, Professor Sofos said that the EU needs to clarify its policy of conditionality to help states with the ambition for EU integration meet those expectations and demands easier, especially in relation to the fight against corruption, transparency, using ICT to enhance participation, etc. 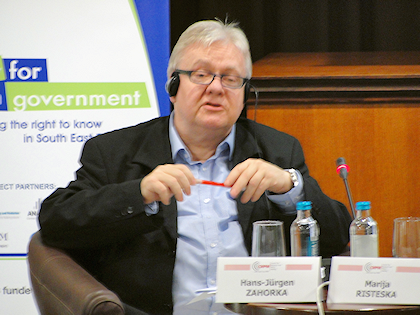 Dr. Hans-Jurgen Zahorka also emphasized on the challenges of the European Union, particularly the European Commission, to maintain an efficient communication with EU citizens, which causes the distance many people feel toward this institution. He emphasized on the importance of organizing information on the webpages besides publishing them, as in this way they would still be hardly accessible. He spoke in detail about how this is the case with the European Commission.

Professor Gligorov reflected on the economic benefit resulting from the OGP initiative by emphasizing the importance of minimizing transaction costs when dealing with the government, as well as making communication easier and less costly. He also named OGP as a means of avoiding asymmetric information, and minimizing chances for side-deals by the government. When focusing on the administrative aspect, Professor Gligorov noted that it is useful to be distrustful toward the government as a means of making them accountable and cooperative with the citizens.

Finally, he also focused on e-governance as an excellent means of reducing corruption and bureaucratic work and citizens have to comply with the requested information of the template forms. Professor Gligorov, concluded his very organized speech by raising the question of “how to activate citizens who are not associated with NGOs in holding the government accountable” as something Macedonia should address in its future OGP activities; and also recommended that “localization should be on the agenda frontier, having in mind that the citizens can be more active if an issue affects them directly.” 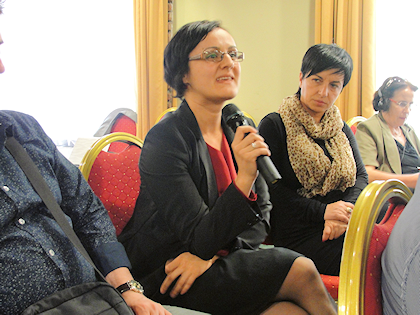 From the audience, Ms. Jasna Koteska (UN Women) emphasized that publishing the budget online is not transparent enough as it is not published as a “citizen budget” and most citizens cannot read it – comparing it to the case of UK where budgets besides being public make it easy to understand where public money go. 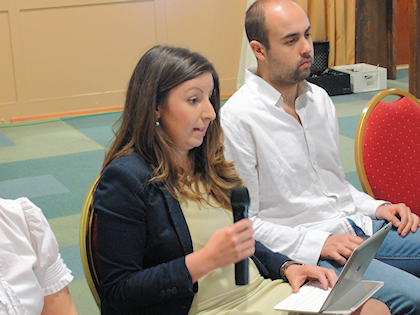 Ms. Petranka Delova Miladinova, coordinator of the LOTOS project at CRPM shared her experience with public servants at municipalities who are not aware they possess public information of relevance to citizens and see them as unnecessary for publication – to support the suggestion that authorities must invest in raising the awareness of civil servants about transparency and accountability. 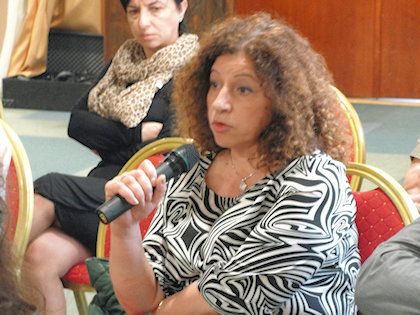 On the other hand, Ms. Qendresa Sulejmani, a monitoring officer of the project Advocacy for Open Government at CRPM emphasized that for the sake of openness, the government [while working toward e-services] must simultaneously work hard toward improving classical means of informing citizens – through info boards, letters, sms, etc – as marginalized sections of the society and more than 90% of people older than 50 report to have never used internet in their life.

During the second part of the debate a short analysis was presented by Ms. Qendresa Sulejmani, on the achievements and challenges of the first National Action Plan for OGP (2012-2014) and the expectations for the next one (2014-2016).

Ms. Irena Bojadzievska, National Coordinator for OGP at the Ministry for Information Society and Administration, also spoke about the challenges of the previous action plan and the working groups that will be formed (with representatives of the civil sector and the government) which will aim toward a more efficient implementation of the new action plan.