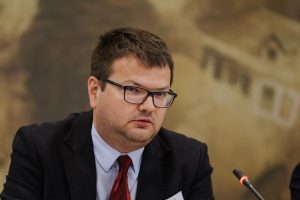 Zhidas Daskalovski has a PhD from the Political Science Department, Central European University. He has published numerous scholarly articles on politics in the Southeast European region, and Macedonia country reports for Freedom House/Nations in Transit, Open Budget Index, Global Integrity Report, Bertelsmann Transformation Index, UNDP People Centred Analysis, UN Human Development Report, Berghof Foundation. A professor at the Faculty of Security-Skopje, University of “St. Kliment Ohridski” Daskalovski co-edited books including: Understanding the War in Kosovo (Frank Cass: London, 2003) and Ten Years after the Ohrid Framework Agreement: Lessons (to be) Learned from the Macedonian Experience, (CRPM and Friedrich Ebert Stiftung: Skopje 2012). He held the Lord Dahrendorf Fellowship at St. Antony’s College, Oxford University, the UCL/School of Slavonic and East European Studies Macedonian Studies Fellowship, and the Social Science Research Council/ Ethnobarometer Fellowship at the University of North Caroline. He was Chief Advisor to New Democracy’s leader Imer Selmani at the 2009 presidential and local elections; to Liljana Popovska, leader of DOM (Greens) at the 2013 local elections. Prof. Daskalovski was Chief Strategist for Gordana Siljanovska Davkova’s 2019 presidential campaign. Since 2015 he is the Macedonian Public advocate of REKOM for the establishment of an official Regional Commission tasked with establishing the facts about the war crimes and other serious human rights violations committed on the territory of the former Yugoslavia in the period from 1 January 1991 through to 31 December 2001.

A Founder and a President of CRPM representing the think tank at public events in the country and abroad he is also Director of the Council of Europe supported School of Public Policy “Mother Teresa”.