Ivica Bocevski is Associate Senior Research Fellow and diplomatic advisor of the Center for Research and Policy Making. He is a Macedonian diplomat, politician, and publicist. He served as a Deputy Prime Minister for European Affairs and as the Spokesperson for the Government. 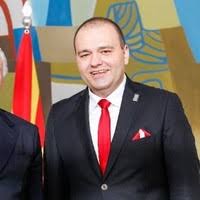 In diplomatic capacity, he represented his country as the first Macedonian Ambassador in Brazil and Latin America, as the diplomatic advisor to the President of the Republic and as a researcher in the research and analysis department of the Macedonian Ministry of Foreign Affairs.

His area of interests is democratization, European integration, and the regional cooperation initiatives in the region of the Balkans, conflict and post-conflict societies, managing diverse societies, multilateralism in the 21st century, migrations, international affairs and the new concepts of citizenship.

His is a syndicated columnist for several Macedonian and regional publications.